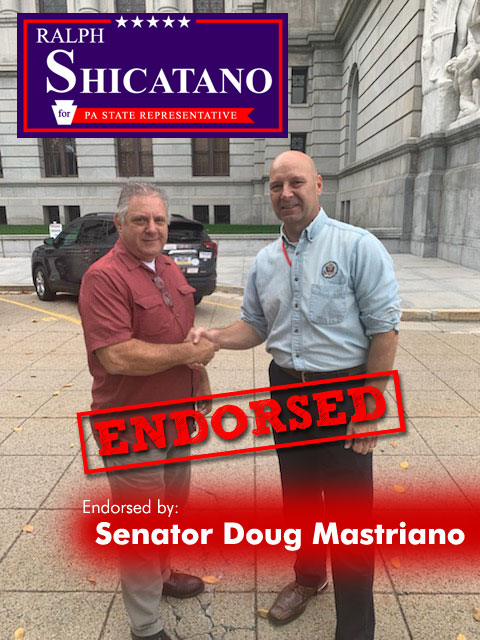 I am very proud to have received the endorsement of a true American patriot, Pennsylvania Senator Doug Mastriano

Doug Mastriano is a combat veteran and the son of a career US Navy man.  He is an Eagle Scout and worked as a paperboy, janitor, security guard, short-order cook, pizza delivery person and dishwasher.  Doug was commissioned in the U.S. Army in 1986 and served on the Iron Curtain with the 2nd Armored Cavalry Regiment in West Germany. While serving along the East German and Czechoslovakian borders, he witnessed the end of the Cold War and thereafter deployed to Iraq for Operation Desert Storm (1991) to liberate Kuwait. His regiment led the attack against Saddam’s elite Republican Guard forces. Doug went on to serve in Washington, DC, the 3rd Infantry Division and US Army Europe.  After 9/11, Mastriano was the lead planner for the operation to invade Iraq via Turkey.  He served four years with NATO and deployed three times to Afghanistan.  Mastriano was the director of NATO’s Joint Intelligence Center in Afghanistan, leading 80 people from 18 nations.  On his own initiative, Doug led seven relief operations to help Afghan orphans.  He completed his career as a Professor of the U.S. Army War College (PAWC), Carlisle, PA, and taught Strategic Studies at the Master Degree level to the next generation of senior leaders.

Mastriano is a Doctor of History (PhD) and has four master’s degrees: Strategy, Strategic Intelligence, Military Operations, and Airpower.  He earned a BA from Eastern University in St. Davids, Pennsylvania and was the alumnus of the year in 2009.   He led the search to locate where America’s greatest WW I hero, Alvin York, received the Medal of Honor and led the construction of a three mile trail, with two monuments and nine markers in the Argonne Forest of France.  He published 30 articles on strategy and historic topics and authored the book Alvin York: A New Biography of the Hero of the Argonne which received four awards. His new book, Thunder in the Argonne is the first to tell the complete story of America’s largest battle, the 1918 Meuse-Argonne Campaign.  Doug’s next book, Pershing’s Lieutenants, will be published in 2020 and is an edited work that focuses on the leadership style of American officers in the First World War.